The Premier Hockey Federation (PHF) was founded in 2015 to provide strong role models and fuel the growth of the game.  We are proud of everything the PHF accomplished through our first five seasons, and we’re excited to share our vision for the future.

The PHF aims to create opportunities for women and inspire the next generation of athletes by advancing the game of women’s hockey.

This will not happen overnight. It will require a sustainable business model, good governance, and strong relationships across the hockey ecosystem. The NHL has been at this nearly a century longer than we have, and achieving what they have achieved will take time.  Nonetheless, the League is committed to this vision and is prepared to invest the time, energy, and resources to make it happen.

Integrity is core to the PHF and we will act with the highest integrity in everything we do.  We keep several other values top of mind as we look to the future.

The league is moving from its original “single entity” structure (where one investor group owned all the teams and operated the league) to a “joint venture” model (where teams are individually owned and the league operates for the benefit of those teams).

We believe a model built on local team ownership will be more sustainable over time, and it is important to note that a full transition to local ownership of individual clubs will take time. The founding investor group, NWHL LLC, began divesting teams in 2019 with the objective of entrusting each team to a  well-capitalized ownership group that is committed to our shared vision.  The full transition could take as long as 5-10 years, and until the transition is complete there may be ownership groups holding more than one club.  Eventually, no group will own more than one club. 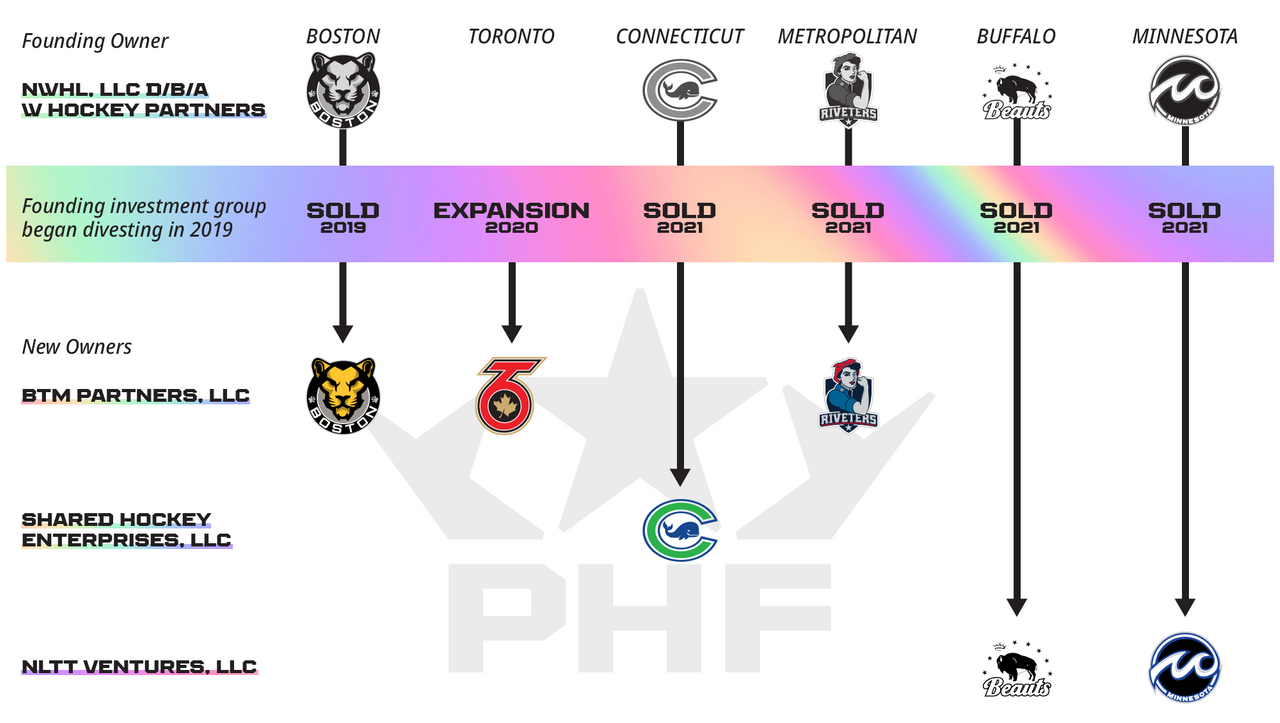 The shift to a joint venture ownership model required a new governance structure, and in October 2020 the Federation adopted its first Constitution and Bylaws to govern its activities going forward.

Though new to the PHF this governance structure is not new to the sports world.  The League’s Constitution was modeled on the NHL and other major sports leagues.  A set of Bylaws ensures fair and competitive play, and an Affiliation Agreement establishes clear expectations between the League and its member teams.  Strong governance is fundamental to long-term success and provides a solid foundation for future growth.

With new governance came new leadership.  An inaugural Board of Governors was formed, consisting of the owners of the Boston Pride, Toronto Six, and representatives of the founding investment group.  The Board’s first major decision - and it was a good one - was to hire Tyler Tumminia as PHF commissioner, succeeding founder Dani Rylan who led the League through its first five seasons.  We were ready to plunge into the next chapter of our history.

Having restructured our ownership and governance models, Tyler encouraged us to reimagine what Season 6 might look like.  She had the audacity to suggest we condense the entire season into a bubble in Lake Placid. We finished 15 games and set new records for viewership, but had to suspend play before the playoffs when Covid penetrated the bubble in spite of strong safety protocols. the championship series was rescheduled and the Boston Pride was the first team to hoist the Isobel Cup on March 27, 2021, in front of a national television audience with the support of leading brands.

As we look to the future, we see expansion into new markets, and new owners joining the PHF family. We see exciting partnerships and a path to profitability.  We see professional women’s hockey players earning a living playing the game they love.  And we see millions of young girls all over the world being inspired to pursue their dreams.

We invite you to help us make this vision a reality.

The PHF logo and team logos are trademarks of the Premier Hockey Federation and the respective clubs and may not be reproduced without the prior written consent of the PHF. © PHF 2021. All Rights Reserved.

MARCHMENT NAMED PHF PLAYER OF THE MONTH FOR JANUARY

A Hall of Fame Night for PHF and All-Stars